Professor Dan Montello works to rewrite text with help of members of UCSB Department of Geography. 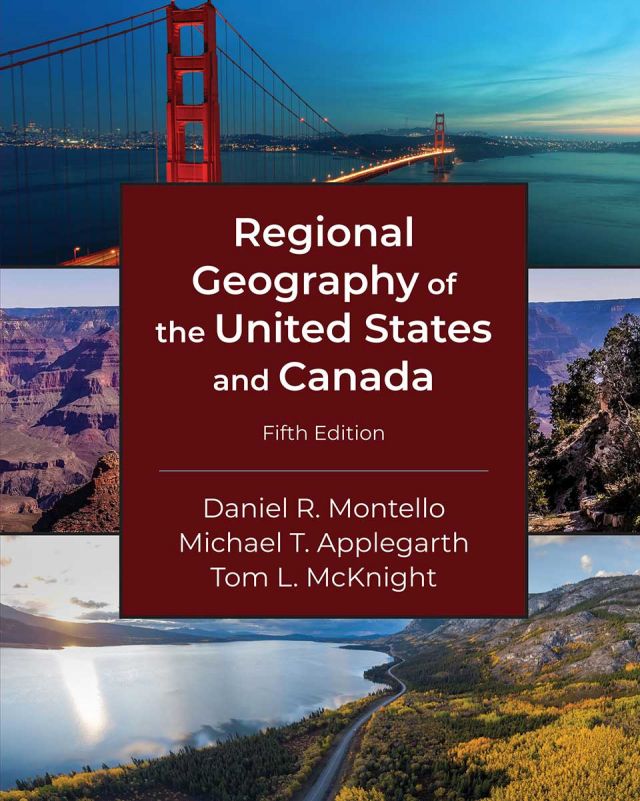 Regional Geography of the United States and Canada

Professor Dan Montello has revised the 4th edition of a textbook on the regional geography of the U.S. and Canada, originally authored by Professor Tom McKnight (deceased) of the UCLA Department of Geography. He was aided in this effort by his coauthor Professor Michael Applegarth of the Department of Geography and Earth Science at Shippensburg University (in south central Pennsylvania). As did the first four editions, the 5th provides a comprehensive overview of the regional geography of the northern North American continent, consisting of the two large countries of the United States and Canada, following longstanding geographic tradition and the most common college and university organization of North American regional geography by grouping these two large countries as a distinct world cultural region, bordering “Latin America” to the south of the Rio Grande (Rio Bravo in Mexico). The text provides a rich and broad overview of both the physical and human geography of these two countries, and in the true spirit of geography, the interactions and interrelations of the physical and human. The book incorporates words, maps, drawings, photographs, and numerical data to present its information.

The first four editions of the text were authored solely by Tom L. McKnight, who passed away in 2004. An aspect of McKnight’s text that Dan and Mike long appreciated was its primary organization according to the spatial units (almost always contiguous) of regions. Regions are a venerable organizing device of geographers (and, most likely, everyone else) that groups the Earth surface into discrete pieces, each with various interacting physical and human components. Regions are used to help us observe, describe, explain, remember, and communicate our planet’s geography. The fascinating question of their ontological status aside, regions provide a simple, convenient, and memorable—if imperfect—way to present the complex patterns of the Earth’s surface; they also provide a logical way to sequence the chapters of this text from one region to the next, spatially adjoining, region. (The Hawaiian Islands allow some discretion here.) Although both Dan and Mike are products of the 20th century promotion of systematic approaches within academic geography, they consider a regional, not thematic, organization to be the right way to understand and present regional geography: as a spatially structured and comprehensive, integrated exposition of Earth’s surface. Indeed, their text makes the case that the essential geographic insight of a (partial) concurrence between physical and human patterns on Earth is only illuminated by regional approaches, not systematic.

The year of McKnight’s passing, 2004, is also the publication year of the 4th edition of this text, the last edition before the current revision. Given the nearly twenty years that have elapsed, this new edition certainly called for extensive updating. Who knew that Hawaii no longer grows sugarcane commercially and fresh pineapples only on Maui, for the tourist market? The new authors diligently updated everything from the populations of cities and regions, the continually evolving patterns of internal and external migrations, and the rise and fall of particular economic activities in the last two decades. Many of the Figures, including all of the region maps and nearly all of the Tables, are new. But revisions went well beyond simply bringing information up to date. The new authors added and modified quite a bit, going beyond the changes of the typical next edition. As a case in point, none of the first four editions discussed anthropogenic climate change, but the 5th does, in several chapters.

Finally, Dan wants to acknowledge the input provided by several other members of the UCSB Department of Geography. Alum Daniel Phillips created the region maps for this book, but more than that, he provided copious geographic wisdom and advice, playing a key role in helping delineate region boundaries in principled ways. Others at UCSB who provided valuable information about one aspect of geography or another include Susie Cassels, Oliver Chadwick (soils meister!), Joe McFadden, Stuart Sweeney, and alums Sasha Gershunov and Violet Gray. Dan and Mike also appreciate Don Rosso, who helped Waveland Press acquire rights to the 4th edition and solicited this 5th edition from us, and Dakota West, who diligently and gracefully saw the editing and proofreading process to a happy ending. Have you ever heard of a more perfect name for the editor of a text on North American geography?