How scientists predict famine before it hits 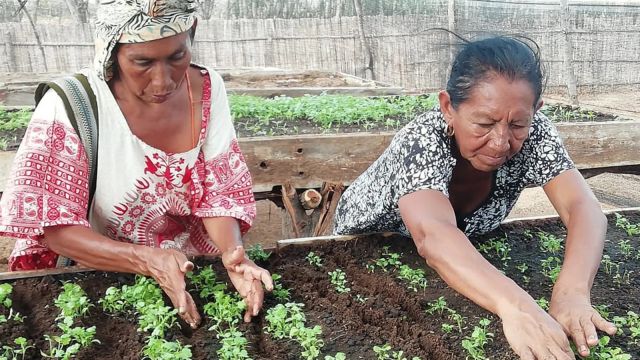 For several weeks back in 2018, Yadira Martínez González suddenly had to feed 15 additional mouths. Her husband's relatives, who had emigrated from Colombia to Venezuela decades ago, returned as part of an exodus of millions leaving a crumbling country.

An economic crisis, attributed to alleged corruption and poor financial management, which the country's president and high ranking officials have denied, had caused inflation to spike by over 860%, according to official data. Martínez González’s work selling her crafts alongside one of the few roads traversing the La Guajira desert wasn't enough to buy food for the nearly 40 people who now made up her family. "We didn't eat that much," she says. "Maybe twice, most likely once every day."

She wasn’t the only one with unexpected guests from Venezuela. Without enough food, animals began to disappear in Martínez González’s rural settlement, Palenstu in La Guajira, one of the more than 2,500 villages – known as rancherías – of the Wayúus, Colombia's most numerous indigenous group. As tensions rose on the dusty ground, satellites and local weather stations showed that rains would not arrive. Without help, crops would fail. A famine seemed imminent.

But it never arrived for the 45 families in Martínez González’s community, nor for 7,000 other people in four municipalities of La Guajira.

In June 2018, a group from the Food and Agriculture Organization (FAO), the World Food Programme and Action Against Hunger visited the communities. They found that the Venezuelan exodus had expanded the size of Wayúu families in the border by an average of four people, while continued drought had nearly halved crop, milk and meat production. With more people competing for jobs, wages were decreasing, and families were owing money just to buy a little bit of seed.

Coupled with the forecast of below-average rainfall and high temperatures, the organisations knew they needed to act before the crisis reached a crest. They set up a rapid action programme, and by September 2018, they’d deployed a four-step strategy to help communities.  Within eight months, they had rehabilitated 18 water wells, distributed seeds, guidance and tools to establish community farms, and sent animal-health brigades to vaccinate and treat about 12,500 cattle, sheep and goats.

The $400,000 (£310,000) programme transformed the communities. Over nine months, the 17 community farms set up by the programme increased the availability of fresh vegetables for families involved from two to four days a week, according to the FAO. In total, the 1,000 households in five municipalities harvested about 115kg (254lb) of food from five different crops – including some new ones, like aubergine, the FAO said. In comparison, families outside the program harvested 35kg (77lb) from far fewer crops.

More importantly, Martínez González says, they recovered their elders' collective mindset towards food. "It allowed us not only to have food but to teach children and young members to value our lands," she says.

A Wayuu family, faced with the migratory crisis, returned to La Guajira near the border with Venezuela (Credit: FAO Colombia)

The intervention, which tried to tackle the crisis well before it struck, is a novel humanitarian response to severe hunger crises. "The issue is not to provide emergency assistance to hand out food, but to create conditions to adapt to drought," says Alan Bojanic, FAO’s representative in Colombia.

Instead of focusing on food donations and cash assistance, these interventions simultaneously build up people's resilience to immediate and future shocks, says sociologist Erin Lentz, who investigates food security and food aid at the University of Texas, Austin.

Early interventions like the one in Martínez González’s settlement are only possible because 40 years ago, after a devastating famine killed about one million people in Ethiopia in the mid 1980s, a group of earth scientists, climatologists, agronomists and data analysts combined forces to ensure that a famine would never again take the world by surprise. They became famine forecasters – and they've been wildly successful in their goal.

[T]hese forecasters can predict the rise of a famine months before it hits. Consequently, they allow local governments to act and international funds to hit the ground before starvation does

"Early warning systems have, by and large, predicted most of the [hunger] crises that we've had recently," says Dan Maxwell, a professor at the Freedman School of Nutrition Science and Policy at Tufts University in the US.

Using real-time analyses of rain and wind patterns, soil moisture levels, river flows, international grain prices, weather variations and satellite data on changes in vegetal cover, combined with information on conflict intensity and humanitarian crisis, these forecasters can predict the rise of a famine months before it hits. Consequently, they allow local governments to act and international funds to hit the ground before starvation does, preventing the worst possible outcome in already food-insecure regions.

In 2016, the Famine Early Warning Systems Network (Fews Net), one of the largest hunger early warning systems currently in place, predicted an unprecedented extreme drought in the Horn of Africa that would later push about 27 million people into severe food insecurity. The alert brought immediate food supplies for two million people in Somalia. Compared to a drought in 2011, early intervention helped to reduce the number of severely hungry Kenyans by over a million, one report found.

"There's a lot of things to be depressed about in the world," says Chris Funk, director of the Climate Hazards Center (CHC) at UC Santa Barbara, which collects most of Fews Net meteorological data. "But I do think it's important to realise that this is [humans] being our best selves."

Funk's hero is a 20th-century statistician named Gilbert Walker. An English mathematician obsessed with finding and measuring patterns and cycles, Walker was recruited to lead the Indian Meteorological Department in 1903. It placed an enormous task on his shoulders: to forecast the arrival of monsoon rains – which, just 26 years earlier, had made crops fail, unleashing the worst famine ever recorded in that country.

Walker set out to understand how rains, temperatures and pressure relate to each other and shape global weather patterns. His and others’ work led to the understanding of El Niño and La Niña, periodic changes in the temperature of the Pacific Ocean that can lead to droughts or excessive rains in certain parts of the world. "We're kind of still in his footsteps. We're doing what he set out to try to do," Funk says.

The rest of the article is available at https://www.bbc.com/future/article/20220525-how-scientists-predict-famine-before-it-hits