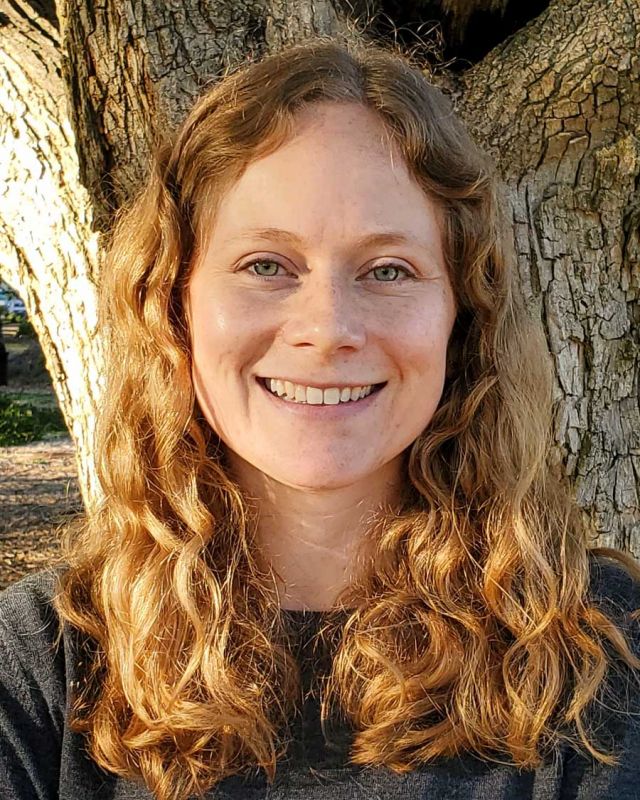 How can we better hold environmental polluters accountable? How can we enhance the efficiency of qubits? These questions, which loom large for the researchers who study them, are the type of big-issue topics that UC Santa Barbara graduate students are encouraged to tackle. And they’re the central themes of the dissertations that won the 2021-2022 Winifred and Louis Lancaster Dissertation Awards(link is external).

This year’s recipients are Emily Williams and Mark Turiansky, selected by the awards committee for dissertations with “significant impact on the field in terms of methodological and substantive contributions.”

Climate Detective
As global temperatures rise and communities feel the effects of climate change, how do we as a global society address the “uneven distribution of harms and gains?” The tropics, for instance, are already bearing the brunt of sea level rise and ocean acidification, yet they are not the places that have generated the magnitude of carbon emissions that cause these events, nor do they benefit in a proportionate way from the activities that cause these emissions. Elsewhere around the world, weather events of disastrous proportions are increasing in severity and frequency, clearly caused by anthropogenic activity — yet who exactly do we hold accountable?

Inequalities and blind spots such as these are the type of thing that spark Emily Williams’ curiosity and activist drive. A lifelong environmentalist, she got her first taste of the discipline of environmental studies as an undergraduate at UCSB under the tutelage of the late Professor William Freudenburg.

“He opened my eyes to thinking about the causes of climate change,” Williams said. She became conscious of the strategies corporations use to justify their actions and their methods of deflection from their outsized contribution to the problem.

Around that time Typhoon Haiyan, then the most powerful typhoon on record, struck the central Philippines, becoming a strong and real reminder of global warming’s effects. But even more compelling for Williams — who had become part of a civil delegation to the UN Framework Convention on Climate Change (the international climate negotiations space) — was the maddening slowness to address these impacts.

Fast-forward several years, and Williams’ desire to illuminate the gaps in climate accountability resulted in her dissertation, “Interrogating the science of climate accountability: Allocating responsibility for climate impacts within a frame of climate justice.” In it, she builds a ‘best practices’ conceptual framework to identify responsibility for climate impacts. She then tests it using an empirical case study involving the drought in the greater Four Corners region and the Zuni people who live there.

“I had the opportunity to work with very diverse mentors, meaning I got to do the attribution science, engage ethnographic methods, organizational sociology and some science and technology studies-related work,” she said. “It’s certainly hard to do interdisciplinary work, but if you find a group of mentors that will support you in this effort, it’s fascinating.”

Among the things she uncovered in her research is the meteorological concept of vapor pressure deficit and its role on droughts, as a result of increased temperatures. By linking this fundamental principle to vegetation, Williams and her co-authors were able to estimate what the Four Corners region would look like without climate change, and identify the “human fingerprint” in this whodunit of global warming. This ability to definitively attribute effects to human activity can help build a case toward holding polluters accountable, advancing the field of climate justice. It’s also what earned Williams the Lancaster Award.

“Emily’s outstanding integration of theory with qualitative and quantitative methods and her passionate commitment to climate justice truly set her apart,” said her adviser, geography professor David López-Carr. “Her dissertation makes a significant contribution to the nascent climate accountability literature by being the first to identify the human contribution to regional climate change and to follow those climate change impacts on vulnerable populations at the local level.

“Her work provides a framework for future researchers and practitioners to advance the important area of climate accountability,” he continued, “with real-world implications for holding those responsible for climate change emissions and for mitigating impacts on vulnerable populations.”

“I feel so honored and so humbled to have received this award,” said Williams, who plans to complete a “short post-doc” before moving into the nonprofit world for more advocacy work. “I know for certain that anyone who gets through a Ph.D. program, with all the challenges and opportunities the program presents, deserves such an award. I chose my dissertation topic because I believe so deeply in the importance of ensuring climate accountability work is done within principles of justice. I am just so happy that the selection committee thinks this topic is important too.”

Quantum Mechanic
The quantum world holds much potential for those who learn to wield it. This space of subatomic particles and their behaviors, interactions and emergent properties can open the door to new materials and technologies with capabilities we have yet to even dream of.

Mark Turiansky is among those at the forefront of this discipline at UCSB, joining some of the finest minds in the quantum sciences as a fellow at the NSF-supported UCSB Quantum Foundry(link is external).

Enabled by relatively recent technologies that allow for the study of the universe at its smallest scales, quantum researchers like Turiansky are still just scratching the surface as they work to nail down the fundamentals of the strange yet powerful reality that is quantum physics.

At the heart of some of these investigations is the quantum defect — imperfections in a semiconductor crystal that can be harnessed for quantum information science. One common example is the nitrogen-vacancy center in a diamond: In an otherwise uniform crystalline carbon lattice, an NV center is a defect wherein one carbon atom is replaced with a nitrogen atom, and an adjacent spot in the lattice is vacant. These defects can be used for sensing, quantum networking and long-range entanglement.

The NV center is only one such type of quantum defect, and though well-studied, has its limitations. For Turiansky, this underlined the need to gain a better understanding of quantum defects and to find ways to predict and possibly generate more ideal defects.

These needs became the basis of his dissertation, “Quantum Defects from First Principles,” an investigation into the fundamental concepts of quantum defects, which could lead to the design of a more robust qubit — the basic unit of a quantum computer.

To explore his subject, Turiansky turned his attentions to hexagonal boron nitride.

“Hexagonal boron nitride is an interesting material because it is two-dimensional,” he explained, “which means that you can isolate a plane of the material that is just one atom thick.” By shining light on this material, it is possible to detect quantum defects called “single-photon emitters” by the bright spots that shine back. These single photons, he added, are “inherently quantum objects that can be used for quantum information science.”

“The main feat was identifying the defect that was responsible for single-photon emission,” Turiansky said. He accomplished it with computational methodologies that he worked to develop in his research.

“One methodology that I’ve worked on a lot is for nonradiative recombination,” he said, describing it in his paper as “fundamental to the understanding of quantum defects, dictating the efficiency and operation of a given qubit.” By applying his methodology, Turiansky was able to determine the origin of these single photon emitters — a topic of much debate in the community. It’s a feat that could be applied to examine other quantum defects, and one that was deemed worthy of the Lancaster Award.

“Mark’s work has moved the field forward by systematically identifying promising quantum defects, and providing an unambiguous identification of the microscopic nature of the most promising quantum emitter in hexagonal boron nitride,” remarked Turiansky’s adviser, materials professor Chris Van de Walle. “He accomplished this by creatively applying the computational approaches he developed and fruitfully collaborating with experimentalists.”

“It’s really an exceptional honor to receive such a prestigious award for my research efforts over the last five years,” Turiansky said. “It’s even more meaningful knowing the high quality of research turned out at UCSB and the fierce competition of my peers. I’m incredibly grateful to my adviser, group members, collaborators, friends and family who helped make this achievement possible.”